Do you and your current rulers think seriously, that you have nothing to do with this and that catastrophe realy?!

Information from the Internet! You may find the information in many languages linked here, too!

What do Kenya, Somalia, Ethiopia, Pakistan and India have in common?

Although the countries in East Africa and Asia are thousands of kilometers apart, the desert locusts haunt both regions. Now the first animals of the 2nd generation are able to fly and the worst fears seem to be true. The flocks are made up of 20 times more animals than the first wave.

In Samburu County, Kenya, swarms of 80,000,000 grasshoppers are reported per square kilometer. In no time at all, they bare everything that is green and rob people's livelihood. The fact that it could come to this is due to the fact that it has been unusually wet in East Africa in the past 18 months.

At the beginning of May there were local floods in Kenya and the monsoon rains were unusually heavy in India and Pakistan. Climate change is held responsible for the extreme rainfall. So far, only 2nd generation nymphs have been sighted in the Asian countries. These are not yet airworthy and still have to undergo a metamorphosis. the swarms of the 1st wave are not as widespread as in East Africa.

The corona-related worldwide lockdown is partly to blame for the plague: Due to the interruption of supply chains, there were (and are) too few pesticides to combat the locusts. This threatens a famine that could cost the lives of far more people than COVID-19 will. The next step is to prevent the grasshoppers from breeding again. A 3rd wave would be 20 times stronger.

Floods in Kenya and Somalia

In the first week of May, 40,000 people had to be evacuated along the Nzoia River. Since the beginning of the great rainy season in early March, 233,000 people have been affected by heavy rains and floods. The weather service predicts unusually high rainfall in the Rift Valley and other parts of the country. The breeding conditions for a third grasshopper wave are still good. 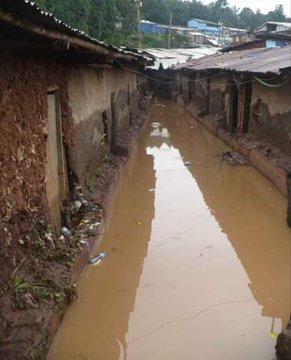 Floods, locusts, covid19, foods and locusts again - these are the climate catastrophes that East Africa is currently facing, and yes it’s the people who live on less than a dollar a day that feel the full brunt of these crisis.
Pic: Alfy Alfredoh